Convection Bake vs. Regular Bake – What is the Difference? 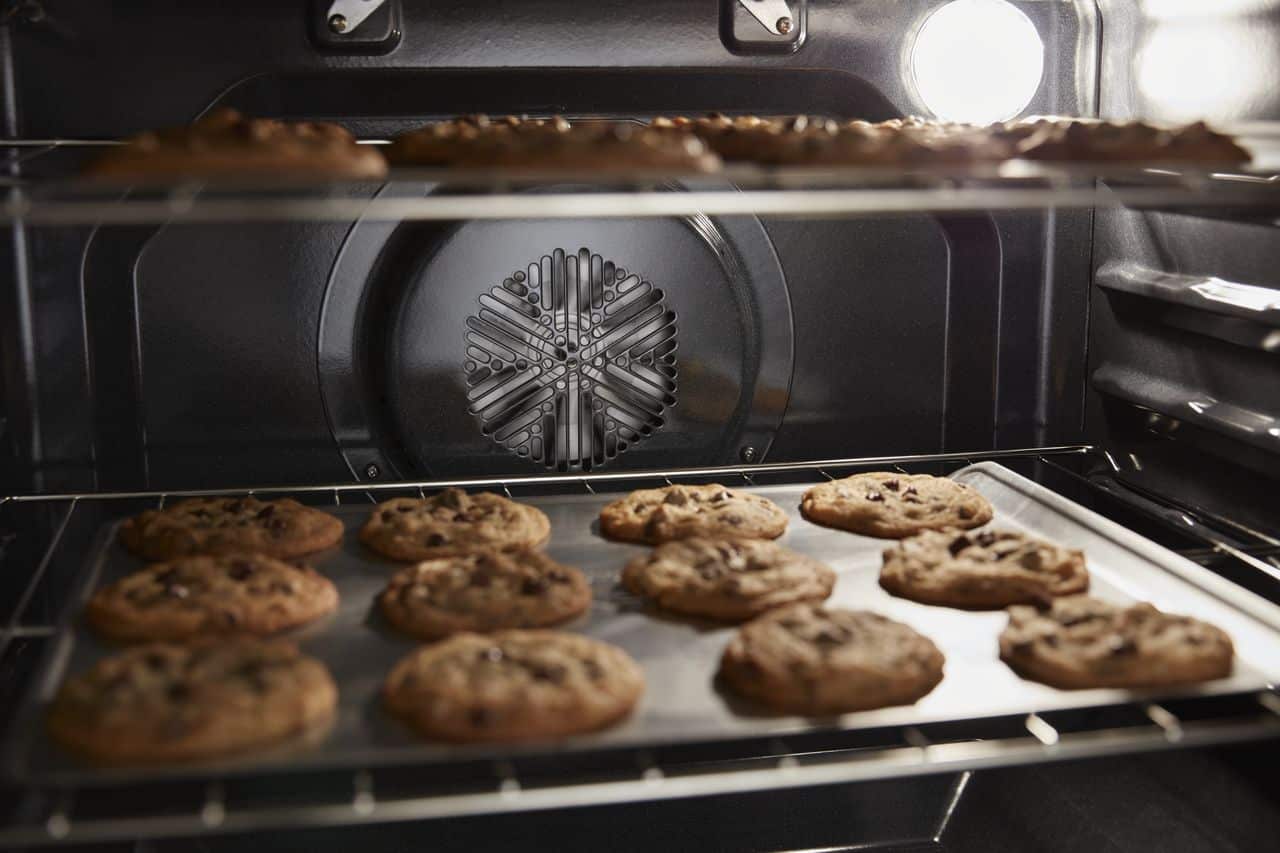 If you buy a new oven, chances are you will sooner or later come across the question of whether or not you need an option for convection. And even if you’ve purchased an oven within the last 20 years or so, you might have a convection option on it that you’ve probably never used. Should you start to use it?

That question, in essence, comes down to the differences between convection and regular baking. Even though the former is newer, it is not by default better. Instead, these represent two distinct baking styles, each with their own advantages and disadvantages that make them good for various recipes.

The Basics: How a Regular Oven Works

You’re probably at least somewhat familiar with how most non-convection ovens work. They have a heating element installed at the bottom, which heats the interior up to the desired temperature. The core concept here is that heat rises: the hot air comes from the bottom of the interior, then rises up to fill all of the enclosed space.

How Convection Baking Different From a Regular Bake?

With the basics of baking in mind, let’s take a moment to discuss where convection baking differs. Put simply, it’s the process of circulating the air more evenly through your oven. That’s accomplished through heating elements at the top and bottom of the appliance, plus a fan at the back that continually pushes the air through.

Think about it like your home’s air conditioning system. Sure, you could have a cooling element in the house. But you also need a fan that pushes the cool air from the source throughout the home. Otherwise, you’ll have spots that are cold, spots that are not, and probably not a lot of comforts. That, on a much smaller scale, is the reason behind convection ovens.

Of course, not every convection oven is created equal. Instead, there are several different types you should be aware of as you shop for appliances or try to better understand your own kitchen. These are the basics:

Generally, true convection is more effective than regular convection, and twin convection makes sense especially for large ovens. Speed convection is relevant for anyone not having a lot of time to bake and intending to bake only in small quantities.

The Advantages of Convection vs. Regular Bake

Compared to regular baking ovens, all convection types have relatively similar advantages that are worth examining further. Of course, and as mentioned above, they are not inherently better than the alternative. Just as you should know about the advantages of convection baking, the potential disadvantages are just as relevant as you make your decision.

First, convection baking typically takes less time than a regular bake with a lower heating element. That’s because the fan makes the whole appliance more efficient, allowing you to cook both at lower temperatures and up to 20% less time. As a result, these types of ovens also tend to be more energy-efficient than their alternatives.

Second, convection baking tends to cook food more evenly. Anyone who has cooked with a conventional oven knows the plight of seeing a crispy bread crust or casserole dish top, only to find that the inside is still raw. You might even be familiar with flipping meatballs midway through the bake to make sure they’re done evenly. Convection takes care of that process for you, by circulating air to get to all parts of the food evenly.

Finally, you can bake multiple items together much more easily. Three pans of cookies, or two pizzas on separate oven racks, will still get done at the same time. Again, the reason is the air, which makes sure the heat circulates to all parts of the interior space. No more switching pans or taking turns.

As mentioned above, of course, convection ovens come with some disadvantages as well. First, they’re typically more expensive, up to twice as much initially. They will also likely cost you more in maintenance over time, as the fan is the most fragile piece of the appliance and might break down.

Second, most recipes are written for regular ovens, and convection ovens complicate the bake. As mentioned above, convection can speed up the process and alter the ideal temperature. You really need to have a good feeling for when something is done and fully baked.

Finally, you might need new dishes for baking. Convection works best when the air circulates through the entire oven evenly. Most cookie sheets and roasting pans are not built that way. You also need at least two inches from the edge of the pan to the side of the oven, which might mean new dishes depending on your existing kitchenware.

What Types of Food Work for What Type of Oven?

Finally, a crucial part of the decision process should be what types of food you want to bake. For cookies and roasts, convection is perfect. For other foods, it might not be.

Bread, for example, does not rise well in convection. Another example would be quick bread or casseroles with open sauce, which might splash around because of the wind caused by the convection. Finally, cakes also tend to be flatter when baked and are easy to miss-time on a convection setting.

The Benefits of a Reliable Convection Repair Expert

Whether or not you choose to go with a convection-enabled oven, you need to make sure that you’re prepared if or when a part breaks down. As mentioned above, the fan tends to be especially fragile, even though it’s crucial to the entire baking process. When possible, work with a repair company that has expertise in this exact type of appliance. Contact us today to learn more about convection ovens, which makes them unique, and how you can get one repaired when needed.